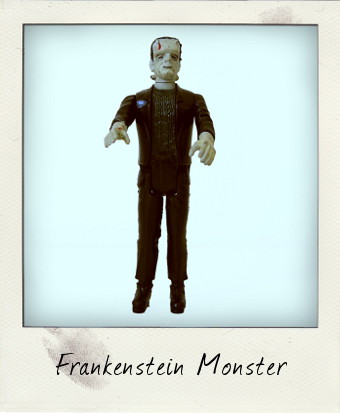 Universal Monsters action figures, it seems, will never go out of fashion. Only this week the Intertubes were buzzing with news of the latest Diamond Select retro cloth Dracula and the Mummy figures, which are set to hit stores this Autumn, following the success of the Wolf Man and Frankenstein last year. These new figures are highly reminiscent of Remco’s 9-inch Universal Monsters from 1980, of course, which spurred me to share another classic Remco action figure from the same year – the Frankenstein Mini-Monster. At 3 ¾ inches, these figures were pint-sized plastic Universal Monsters released in conjunction with the larger figures (hence the “Mini” moniker), but have arguably become even more popular than their larger counterparts and have enjoyed almost continuous adoration from monster movie and action figure fans ever since. 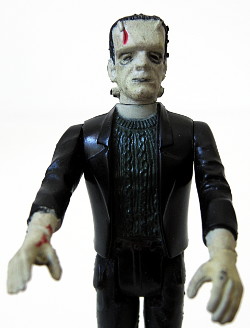 Perfectly detailed in almost every way, these Universal Monsters feature some of the best movie likenesses ever created in an action figure – the resemblance to Boris Karloff as The Monster in James Whale’s wonderful 1931 movie Frankenstein is spot-on – and details such as the weave of the monster’s jersey, the bolts in his neck, the blood on his forehead and even the laces in his boots, have all been carefully reproduced. Frankenstein has the usual limited 5 points of articulation in the neck, shoulders and hips, but that was standard for the day and actually suits the stiff-limbed Frankenstein really well!

Remco re-released all figures in the series, which also included Dracula, the Wolf Man, the Phantom of the Opera, the Mummy and the Creature from the Black Lagoon, as glow-in-the-dark versions. As an extra and unexpected feature, I discovered that this Frankenstein Monster is also glow-in-the-dark edition! After a few seconds of charging him up under a light bulb, his face and hands still glow eerily with the lights out…utterly cool!