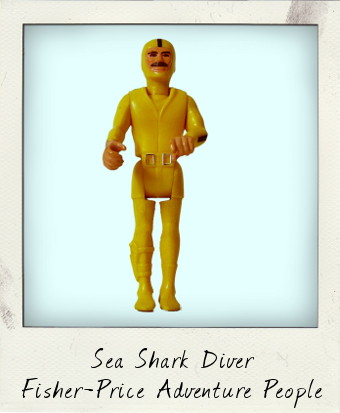 Kenner’s 3 ¾-inch Star Wars action figures turned the world of movie tie-in toys on its head and became one of the world’s most popular collectible lines ever. Before those toys were even a twinkle in the eye of a Kenner executive, however, the very first 3 ¾-inch line of action figures and vehicles was launched in the US in 1975 and went on to influence all those that followed – the Fisher Price Adventure People!

These sturdy little figures were clearly designed to encourage kids’ fascination in exciting jobs and just about every adventurous occupation you could think of was covered during the decade that they were in production – there were racing drivers, skydivers and pilots, to name but a few, as well as several different divers like this chap here with the Tom Selleck ‘tache. And whilst there were considerably more male figures in the line than females, there were some cool girl adventurers too like a rescue worker, an astronaut and even an alien. 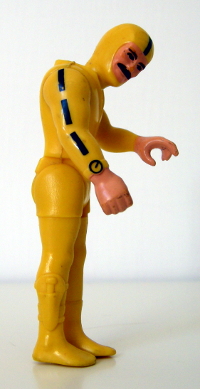 Surf's Up with Fisher-Price Adventure People

The Adventure People figures had the standard 5 points of articulation at the shoulders, hips and head, but what made these figures extra special was the movement that was built into the neck – a cut joint allowed for the usual 360 degree Exorcist head spin, whilst a ball joint allowed the head to look up and down in a nodding movement. All the Adventure Series figures had open hands with fingers curled as if ready to grasp something – our diver here looks like he’s pouring a drink! Many figures were sold with accessories, or would fit into one of the numerous adventure playsets. This yellow diver is date stamped 1979, but was also issued as part of the Sea Shark set from the early 1980s alongside another diver, an “unsinkable patrol boat” with scuba diving accessories…and a fearsome looking rubber shark!

For simply constructed figures, the attention to detail was actually rather good – the details of the knife strapped to the leg, the silver belt buckle, black stripes on the wetsuit and even the hands on his watch all contribute to make this a great little figure. A keeper!