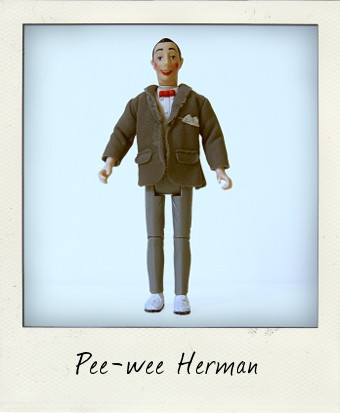 Love him or hate him, if you were alive in the 1980s you can’t have missed American comedian Paul Reubens in the guise of his alter-ego Pee-wee Herman. Star of Pee-wee’s Playhouse, an enormously successful and groundbreaking Saturday morning television show for kids in the US, worldwide audiences were first introduced to him via Tim Burton’s debut film Pee-wee’s Big Adventure, which turned the road movie on its head and Pee-wee Herman into a cult favourite.

The last couple of decades have been a bit of a roller coaster ride for Reubens, both professionally and personally, but finally, Pee-wee Herman is back with a hit show on Broadway starring all the old Playhouse gang, so to celebrate (as I love Pee-wee to bits) I thought it would be fun to look back at this vintage Matchbox Pee-wee Herman action figure that was issued at the height of Pee-wee mania in the late 1980s. 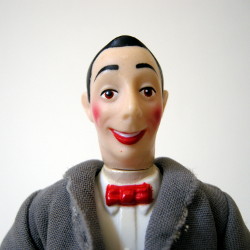 A great likeness of Pee-wee Herman

Pee-wee was issued alongside all the Playhouse faces such as Miss Yvonne, Cowboy Curtis, King of Cartoons, Pterri, Conky and even Chairry (to name but a few) and is an excellent likeness of Paul Reubens. At a whisker under 6-inches tall, Pee-wee is a great height for display and has ten points of articulation – not bad for those days when elbows and knees weren’t always bendable! A second Pee-wee figure was also produced with his famous red scooter and crash helmet, whilst this is the simpler of the two. I was delighted to find him still wearing his cloth jacket, the accessory that seems to have most readily been mislaid with this figure. I assume the jacket must have originally been glued together as if buttoned – it is now open, but there are faint traces of adhesive along the edges. 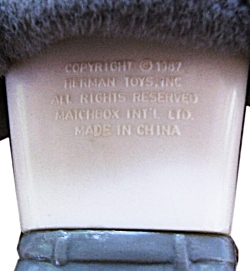 Hitting toy store shelves in 1988, this figure is date stamped 1987 on the back. In 2007 Neca reissued a set of vintage-style Pee-wee’s Playhouse figures that all look remarkably similar to the Matchbox originals, so much so that until I held this online purchase in my hands and could check the copyright information for myself I wasn’t entirely certain which version I had. I haven’t actually seen a loose Neca Pee-wee to be able to compare and contrast, however. If anybody has one, feel free to leave a comment below.

A gorgeous figure and an absolute must for Pee-wee Herman fans!