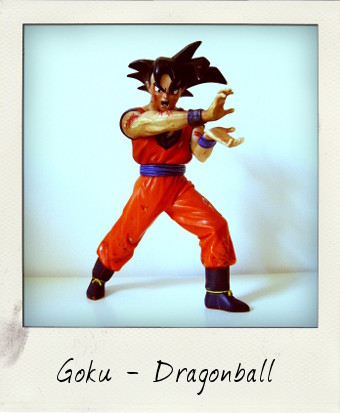 The collection of Japanese Anime action figures is very much a sub-genre within action figure collecting as a whole and I certainly wouldn’t profess to having anything other than the slightest passing knowledge of the subject. Having said that, however, I know a handsome looking action figure when I see one, so this impressive sculpt of Dragon Ball Z hero Goku immediately caught my attention when I saw him on a market stall in Rome recently. Curiously, Japanese animation TV series have always been enormously popular in Italy – far more so than in the UK where I was born and raised – so it isn’t that surprising to discover Anime related merchandise here, although this particular figure was a spectacular find!

Issued in 2001 by Irwin Toy as part of the Dragon Ball Z Collector’s Edition range, Goku is an impressive 9 inches tall and is sculpted in solid PVC plastic making this a heavy figure that has far more in common with mini-busts and statues, if truth be told, than modern day multi-jointed action figures. In fact, he was originally sold with a display stand and there are only 4 points of articulation at the neck, shoulders and waist that allow one to make only subtle changes to the pre-established stance of Goku’s signature attack – arms stretched, with his palms ready to blast his Kamehameha energy wave thingamajig…As I said, I’m no expert…

Limited articulation doesn’t seem to have stopped the fun factor with this particular figure, though, as there are clear signs of play wear at the tips of his black hair, which has worn away a little. This doesn’t detract from the figure at all, however, as the paint work overall on the figure is highly detailed and intended to look battle worn in the first place! There are brown mud splashes on Goku’s boots and lower trouser legs, whilst the upper part of his tunic has been sprayed to look slightly grubby. There are tears in both upper and lower areas of his tunic with scratches with bloody cuts showing on the skin below. A little extra battle damage is barely noticeable! He’s a keeper!