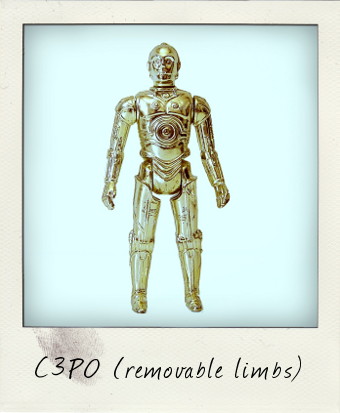 I mentioned in an earlier post that I have recently been re-watching the original Star Wars Trilogy again on DVD. The Empire Strikes Back inspired me to dig out one of Kenner’s major Star Wars 3 ¾ inch action figure variations, the C-3PO (or See-Threepio) Removable Limbs version, and display him just as he appears in the movie – disassembled and slung into a harness carried on Chewbacca’s back. Remember the scene when Chewie is trying to fix 3PO?

Oh, my! What have you done? I’m BACKWARDS. You flea-bitten furball!

An earlier version of C-3PO had been issued in the first 1977 wave of legendary 12 back cards, whilst this new – and let’s face it – masses more fun version, appeared in 1982. Now!! With removable arms, legs and back pack the packaging promised – at last, kids had an action figure where you were supposed to pull its limbs off! The only disappointment, I suppose, is that the head wasn’t removable, although I dare say the chances of finding complete figures so easily thirty years later would have been seriously diminished if that had been the case. For some Star Wars fans, however, Threepio is the droid they love to hate – evidently tearing limbs off this character proved popular, because this variation became the standard C-3PO and later reappeared on both The Return of the Jedi and The Power of the Force cards.

An easy figure to sculpt, C-3PO is one of the best Star Wars movie likenesses of any figures Kenner produced and his gold vacuum metal finish really makes him a beauty. The paint work is still in very good condition on my figure and the limb sockets are still nice a stiff; the country of origin Hong Kong and the abbreviation for Lucas Films Ltd © LFL 1982 run downwards on two lines on the back of his left thigh. Most importantly, my C-3PO still has his black vinyl back pack accessory with which he was issued so that he can, in turn, become an accessory for Chewbacca – utterly cool!