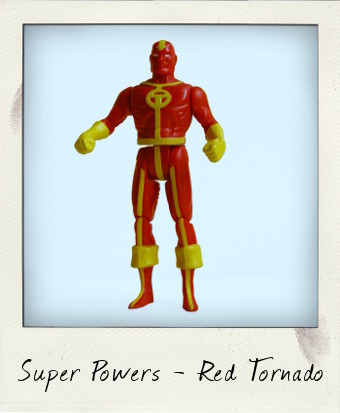 It’s been a while since I featured any of the figures from one of my all time favourite 1980s toy lines – Kenner’s Super Powers. Hands down one of the best crafted action figure series ever, these sturdy 4 inch superheroes, with their accurate paint work, near perfect comic book likenesses, and their built in “super power” action gimmicks, continue to be loved by collectors today. I plan to collect them all!

Kenner’s Super Powers had a short, but sweet shelf life and ran for only two series from 1984 to 1986, with our Red Tornado here first appearing in the second series in 1985, alongside villains Darkseid, Desaad, Kalibak, Parademon, Mantis, and Steppenwolf, and fellow heroes Dr. Fate, Firestorm, Green Arrow and the Martian Manhunter. He was even repackaged and reissued as part of the third and final wave of figures in 1986.

Red Tornado aka John Smith aka the Amazing Android, to quote the back of the original Kenner packaging:

“… is a specially designed android with the ability to spin the lower half of his body at tremendous speeds. This allows him both to fly, and to create a powerful cyclonic wind.”

Always up for a creative challenge the Kenner design team had this covered with his very cool Super Power – the “Power Action Tornado Twist”. Just squeeze his right arm and watch him twist back and forth! Like all the other figures in this line the power is ingeniously created without the need for extraneous buttons or switches – it really is a built in ability – and after almost thirty years still works just fine! In addition to this twisting action there is also standard articulation at the neck, shoulders, hips and knees, which was very respectable for that period. 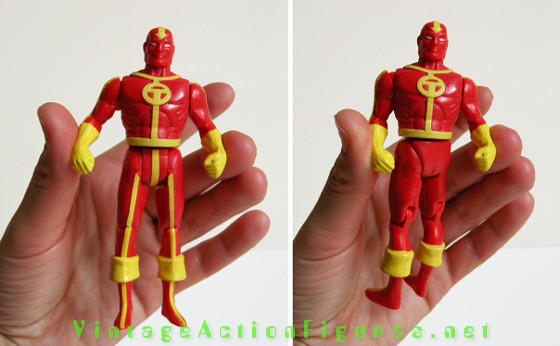 Red Tornado first appeared in the DC Comics Justice League of America issue #64 in August 1968, making him just a few month younger than yours truly! He looked pretty much as he does in this figure, with the addition of a blue removable cloth cape, which my loose figure is sadly missing. Those yellow leg stripes seem to come and go in the comic book versions of the Red Tornado’s costume over the years, but here they were certainly no afterthought, as all the markings and the emblem on his chest have been both sculpted and painted.

The carded figure came with no accessories, but was issued with the usual mini-comic which teamed Red Tornado, Hawkman and Green Arrow against Darkseid and his Parademons, who plan an invasion of Star City.