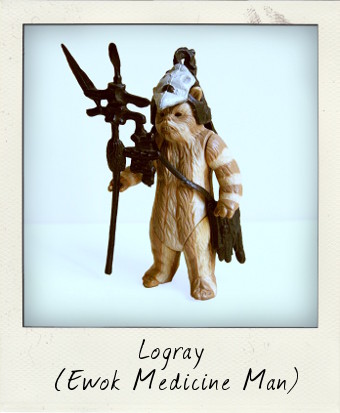 Few characters in the original Star Wars trilogy have divided fans more than the Ewoks, with those that love ’em on one side, and the rest of us, who would happily throttle the flea-bitten teddy bears, on the other! Unfortunately, they’re rather hard to avoid in Return of the Jedi. I do confess, however, to actually rather liking this vintage Kenner figure of Logray, the Ewok Medicine Man – and not just because he looks like a sinister version of Garfield the cat!

Logray is impressive as one of the best movie-likenesses in the entire Kenner 3 ¾ inch original Star Wars figure series – check out his beady black eyes and sharp teeth. The vintage Ewok sculpts were excellent and really managed to capture the furriness of the creatures in hard plastic, whilst Logray here was issued with some of the best and most detailed accessories of any Star Wars figure. My loose figure still has all three original accessories – his ornamental bird skull headdress, his Shaman Medicine Pouch, and a ceremonial Shaman staff – all richly decorated with feathers and bones, and molded in a slightly soft plastic. The accessories look black in the photo, but are actually a very dark brown in colour. 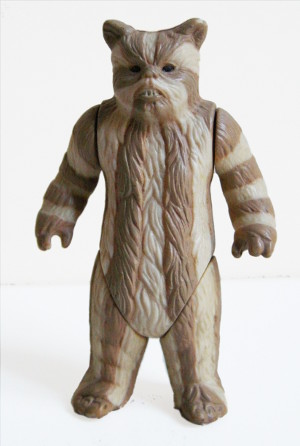 The detail in the added gear, in fact, completely distracts one from the fact that the articulation is even more limited on this figure than usual, with only four points – at the shoulders and hips – with no movement at all at the neck, which would have presumably interfered with his headdress, which clips over his ears and then fits snugly down the back of his head and shoulders.

First released in 1983 on Return of the Jedi 65 back cards, my Logray is also date stamped “© LFL 1983” on a raised bar on the back of his left leg, with the country of origin Hong Kong abbreviated to “H.K.” on the right leg, also on a raised bar. Action figure fans who like to track down all the variant figures can knock themselves out with a variety of colours in his stripes, which can vary in their shades of tan and brown. I only have one Logray figure so can’t compare him to others, but believe mine to be the darker striped version.

So, there you have it. An utterly cool Ewok figure. Maybe I’ll learn to love them after all…one figure at a time!