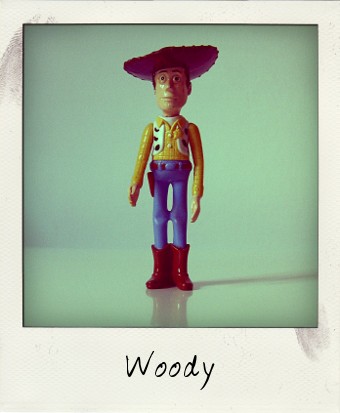 As somebody who has been a vegetarian for the last 23 years I haven’t seen the inside of a McDonald’s for quite some time, or likewise, collected any Happy Meal toys directly in a McDonald’s restaurant; their action figures do seem to pop up regularly on market stalls, however, and that’s where I found this Woody the other day. Love them or hate them, the McDonald’s Happy Meal action figures have clearly cornered a slice of the collectors’ market – earlier this year UK newspaper the Daily Mail reported that an entrepreneurial 11-year-old had sold his entire collection of McDonald’s memorabilia for over £8,000 sterling!

From 1996 through to the end of 2006, Disney films were often promoted via the free gimmicks and toys given away with Happy Meals, until their relationship with McDonald’s finally ended in 2007. Whilst there’s nothing officially on the record by the Disney company about the real motivation for its distancing itself from McDonald’s it would be easy to imagine that growing criticism blaming the fast food giant for childhood obesity may have played a part.

With a date fixed in June 2010 for the release of Toy Story 3 there’s been a flurry of renewed interest in the Disney/Pixer movie on auction sites with collectors snapping up the tie-in toys that were released at the time of the previous two Toy Story movies.

This Woody figure is actually not bad at all – he has poseable arms and both his waist and head swivel. At approx 4 1/4 inches tall, he’s a good height and stands well. The detail is fairly accurate too although it’s a pity that his neckerchief is white rather than red. This would seem to be somewhat of an oversight given the details in his face, eyes, jacket etc.

He was only available in McDonald’s for a few weeks in limited numbers in 1996 and was part of a five character set which also included Buzz Lightyear, Bo Peep, Hamm the Piggy Bank and Rex the Green Dinosaur.