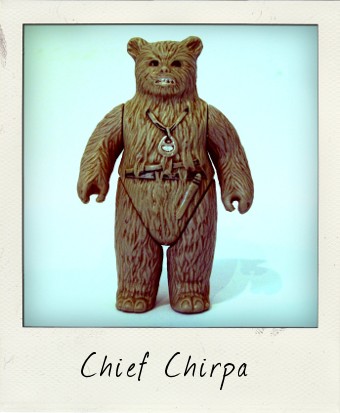 Love them or hate them (or even love-to-hate-them by joining those who have formed a Facebook group dedicated to their eradication) the Ewoks are very much part of the Star Wars trilogy and for the action figure collector provide a few harder to find variations to track down.

Being the characters that so many – even die-hard Star Wars fans – loathe, as well as being figures that are not so instantly recognisable to the uninitiated, means that you can often pick them up for mere cents in the bargain bin at markets where they’ve been simply overlooked, like this Chief Chirpa action figure that I found the other day.

For Star Wars fans who actually like Ewoks, Chief Chirpa would seem to come out on top as everybody’s favourite furry alien. He appeared in both Star Wars Episode VI: Return of the Jedi (played by Jane Busby) and a later animated television series Star Wars: Ewoks. 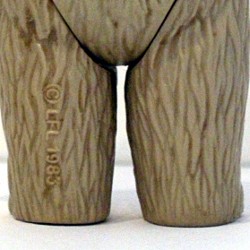 This particular action figure was made in 1983 as part of Kenner’s Return of the Jedi Collection and originally included a staff and hood (replacement accessories are easily found). Of the several variations available, this figure is interesting in that it mentions no country of original (no COO) and the copyright information reads © LFL 1983 (Lucas Films, Ltd.) with the lettering going down the leg rather than up as seems to have been more often the case with this figure. This version of the Ewok chief also had slightly smaller, if not beadier, eyes too!