The Universal Monsters that emerged from the Universal Studios between 1923 to 1960, starting with The Hunchback of Notre Dame and including some of the scariest cinematic monsters to have ever graced the silver screen - The Phantom of the Opera, Dracula, Frankenstein's Monster, The Mummy, Bride of Frankenstein, The Invisible Man, The Wolf Man, and the Creature from the Black Lagoon, to name but a few - have been the subject of numerous action figure lines over the last few decades. In fact, Universal Monster action figure collection, rather like that of Star Wars action figures, could almost be defined as a specific field within the world of vintage action figures as a whole. 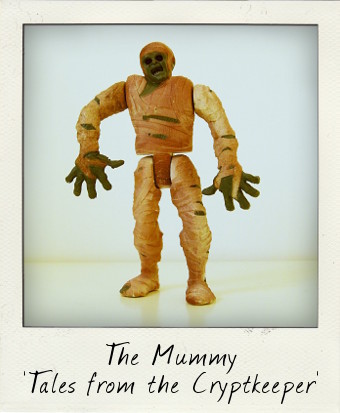 With Halloween fast approaching this seems the perfect time to dig up - terrible pun! - this Mummy action figure from the animated cartoon series Tales from the Cryptkeeper. Running for two seasons from 1993-1994, the Mummy character appeared in episode 11 from the first season - This Wraps It Up – which first aired on December 4, 1993. Created in 1994 by one hit wonder toy manufacturers Ace Novelty, who appear to have only ever produced the Cryptkeeper series, this 4 ¾ inch figure is pretty … END_OF_DOCUMENT_TOKEN_TO_BE_REPLACED 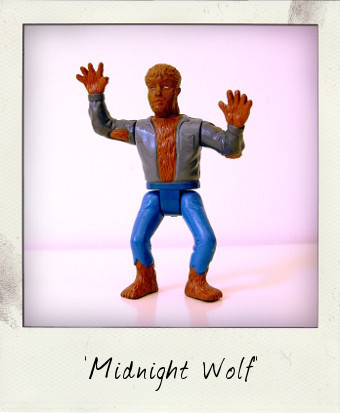 Midnight Wolf? Surely, that's the Wolf Man as played by the great Lon Chaney Jr. in the 1941 Universal horror film of the same name?! Apparently not, folks, although I'll admit that this 4 ½ inch action figure had me flummoxed for ages! I'm a huge fan of the Universal Monsters so when I saw him going for a song on an Internet auction site I couldn't resist buying him, but once he had arrived and I'd peeled off the bubble wrap I could find no copyright information, COO or date of manufacture … END_OF_DOCUMENT_TOKEN_TO_BE_REPLACED 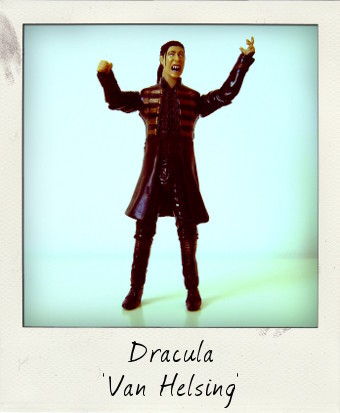 With the month of October now well under way, let's start the countdown to Halloween with the first post in a series dedicated to monsters and ghouls, with a few slayers thrown in too! Today's action figure is a fresh lucky find that I picked up only yesterday in a mixed box of random toys on a market stall in Rome. Some years need to elapse before this becomes truly vintage, of course, but it's such a fun figure that it merits its own review now! Whilst Stephen Sommers' 2004 … END_OF_DOCUMENT_TOKEN_TO_BE_REPLACED 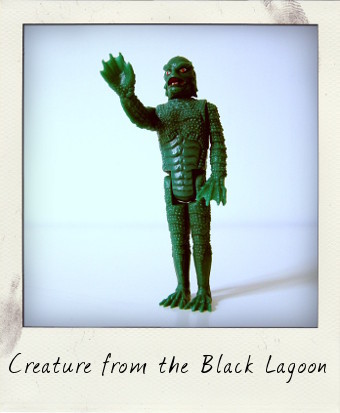 I'm a huge fan of classic Universal Monster movies and consequently have a real weakness for any Universal Monsters action figures I happen to find. Luckily, these film characters have been revisited by toy manufacturers time and time again over the years and there are plenty of them out there for collectors to get their fangs into! The Mini Monsters line is one of my absolute favourites – at 3 ¾ inches these were small, but perfectly formed, action figures that actually carried strikingly … END_OF_DOCUMENT_TOKEN_TO_BE_REPLACED 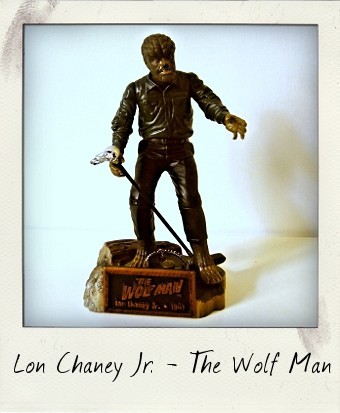 With Benicio del Toro currently starring in The Wolfman movie as the latest in a long line of cinematographic lycanthropes, I thought this would be a an excellent excuse to take a look back at the greatest Wolf Man of them all – Lon Chaney Jr. I saw this Universal Studios Monsters action figure in the window of a second-hand store recently and could scarcely believe my eyes - although I'd known about this Sideshow Collectibles figure for years, it had sold out very quickly soon after release … END_OF_DOCUMENT_TOKEN_TO_BE_REPLACED