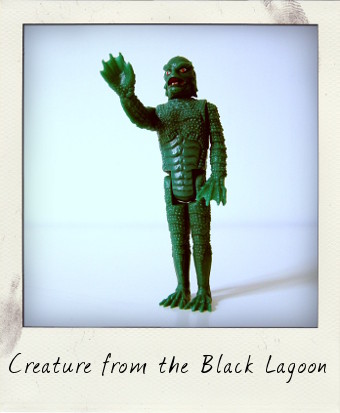 I’m a huge fan of classic Universal Monster movies and consequently have a real weakness for any Universal Monsters action figures I happen to find. Luckily, these film characters have been revisited by toy manufacturers time and time again over the years and there are plenty of them out there for collectors to get their fangs into!

The Mini Monsters line is one of my absolute favourites – at 3 ¾ inches these were small, but perfectly formed, action figures that actually carried strikingly good movie likenesses. They were produced in conjunction with a series of 9-inch action figures by Remco, a subsidiary of Azrak-Hamway International, Inc. (AHI), the toy company that had famously outbid Mego for the Universal Monsters license in the 1970s.

The six figures in the series were released in 1980 first in a non-glowing edition, then re-released as glow-in-the-dark versions – Dracula, the Wolfman, Frankenstein, the Mummy and the Phantom of the Opera were all there, as was this scaly chap you’ll have surely recognised as the Creature from the Black Lagoon from the eponymous 1954 film. He features the usual limited 5 points of articulation in the neck, shoulders and hips, which was standard for the day, but the attention to detail of his webbed hands and feet and scaly torso and spine is just excellent. The red of his mouth and eyes is highly reminiscent of the Creature as he appeared on the original movie poster of the day.

The carded Creature from the Black Lagoon action figure wasn’t issued with any accessories, although for lucky kids who had all six figures Remco released the Mini Monster Play Case which included a cardboard crypt, a cage and a lab table, as well as the now rather scarce Monsterizer Play Set.

Collect them all …you know you want to!