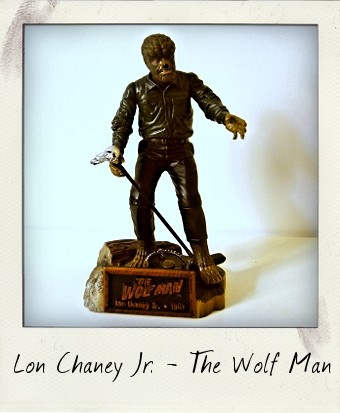 With Benicio del Toro currently starring in The Wolfman movie as the latest in a long line of cinematographic lycanthropes, I thought this would be a an excellent excuse to take a look back at the greatest Wolf Man of them all – Lon Chaney Jr.

I saw this Universal Studios Monsters action figure in the window of a second-hand store recently and could scarcely believe my eyes – although I’d known about this Sideshow Collectibles figure for years, it had sold out very quickly soon after release in 1998 and I thought it unlikely that I would ever happen upon one at a bargain price – certainly not in Rome, Italy! I’m a huge fan of those old Universal Pictures monster movies so this was a must-have!

Measuring 8 inches high, this action figure features a truly stunning likeness of Lon Chaney, Jr. in the role of Larry Talbot aka The Wolf Man in the 1941 movie and is fully poseable with 12 points of articulation. Action figure artist Oluf W. Hartvigson did a fabulous job on this figure – the detail in the face is extraordinary – his eyes are even painted to appear wet with tears. Whilst the figure was sold loose and out of its box, it still had all the accessories – a mossy green base with a name plate for the film The Wolf Man (note the original spelling with two words, not one), Talbot’s wolf’s head walking stick and a gruesome looking Wolf Man trap.

I love this action figure…!