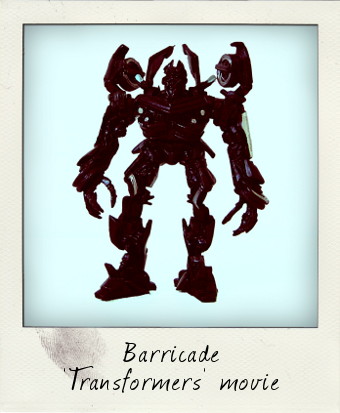 The countdown to the release of the third Transformers live action movie – Transformers: Dark of the Moon, or more simply Transformers 3 as it’s being trailed here in Italy – is well underway! Megan Fox may have jumped the franchise (or, if you believe the gossip columns, been pushed out by director Michael Bay), but Shia LaBeouf is still hanging on in there, looking all grown up in this movie and ready to be dragged back into the Transformers’ war…again! These CGI epics may have their detractors, but I’ve always enjoyed them so couldn’t ignore this 3 ¾ inch Barricade action figure from the first 2007 Transformers movie when I found him on a thrift stall recently.

Whilst not being a traditional Transformer as such, this action figure is more of a robot replica and boasts 8 points of articulation at the neck, shoulders, hips, knees and waist – you can quite literally pose him in just about any position you choose! The soft, slightly bendy black plastic sculpt is incredibly detailed with additional decals and daubs of silver, blue, white and red paint, to highlight the details of his Mustang police car mode, making this a great movie-accurate likeness too. 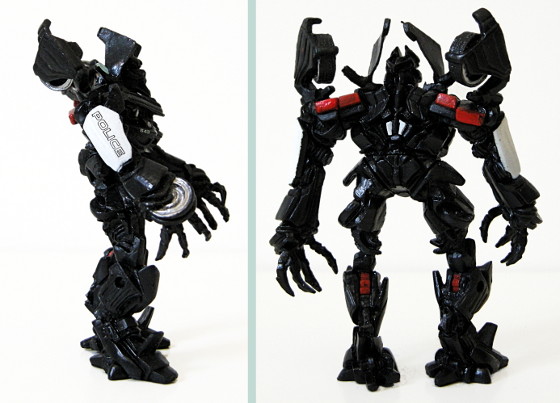 Barricade action figure - side and back view

Copyrighted to Hasbro with the official Transformers logo stamped on the soles of his feet I had thought that it would take me only a matter of minutes to research this figure online, but not so! Whilst this was clearly officially licensed merchandise from the movie Transformers, it wasn’t listed in any action figure archives. On closer inspection I found the tiny letters BFI – this Hasbro figure was actually made in conjunction with Basic Fun, famous for their novelty keychains. Somewhere along the line the metal keyring has been lost or even deliberately removed, although I can see no sign of where it was originally attached – if anybody has any thoughts on this one, feel free to leave a comment below.

Keyring or action figure or both – he’s a keeper!