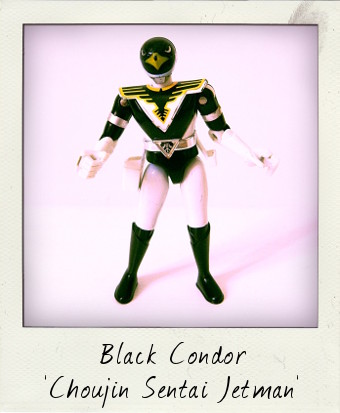 I don’t have many diecast action figures in my collection, but whenever I happen upon one on a market stall I almost always have to buy it right away – a small toy with metal parts is always surprisingly heavy in the hand and makes it feel nicely solid and instantly appealing.

Little did I realise, however, when I found this 1991 Bandai action figure of Gai Yuki aka Black Condor from the early 1990s Japanese television series Choujin Sentai Jettoman (Birdman Task Force Jetman) recently, that Gai Yuki’s name would suddenly be in the news again. After being killed-off in the original Super Sentai television series, Gai Yuki – played by Wakamatsu Toshihide – was back as a guest star, albeit in ghostly form, in the recent Wings are Eternal episode of the all new Kaizoku Sentai Gokaiger (Pirate Squadron Gokaiger) anniversary series.

All the heroes of Choujin Sentai Jetman (or Jettoman) have been blasted with “Birdonic Waves” (what else?!) giving them special powers and cool ornithological names – Black Condor was joined by Red Hawk, Yellow Owl, White Swan and Blue Swallow, all dressed in colours to match. They use their powers to fight the bad guys of the Dimensional War Party Vyram and are constantly saving the planet.

Our Black Condor here, is missing some of his accessories – his wings, a sword and a blaster – although his plastic holster belt is still intact. Like many Bandai action figures, this 4 inch figure is predominantly made of diecast metal, but has some plastic parts, most noticeably the lower arms and hands, which allow for greater articulation in the hands and fingers – he can even form a fist! Overall the articulation is excellent with 11 points at the neck, shoulders, elbows, hands, hips and knees – he poses beautifully! With only a little paint wear on the tip of his beak, this figure is in good played-with condition.