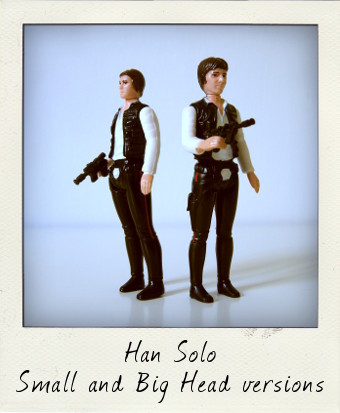 Without wanting to seem mono-thematic here at Vintage Action Figures, last week’s look at Indiana Jones made me want to take a closer look at another Harrison Ford action figure – indeed, not one but TWO figures: the big and small head varieties of Han Solo. When in 1978 kids could finally get their hands on Kenner’s 3 ¾ inch Star Wars action figures (with 1977 stamped on the back) the Han Solo figure complete with Rebel Blaster proved enormously popular. Let’s face it, not only was he the coolest character in the movie, Harrison Ford who played Han Solo so charismatically in the movie, was the only cast member who went on to become a superstar. Soon after its release, the powers that be at Kenner looked at the original figure and decided that Han needed some work and in an unprecedented move for those days, chose to re-sculpt the head. And so the mother of all Star Wars action figure variations was born.

But did Kenner get it right?

The Small Head Han did admittedly have a tiny head, but the molding was as much like (or rather unlike) the screen actor as any of the other figures in the line. The new Big Head Han on the other hand, really does have a huge head which looks disproportionately large on what is an identical body. And what’s with the new fringe!? The small headed variety got the hair spot on with a ruffled centre parting.

Personally, for the sake of completeness, I just had to have them both although the small head version is the more collectible and rarer of the two! They are in very good condition, with hardly any paint wear and stiff limbs. The copyright information is identical on both – dated 1977 © GMFGI (General Mills Fun Group Inc, the company that owned Kenner) with the COO as simply Hong Kong.

Every collection should have them!