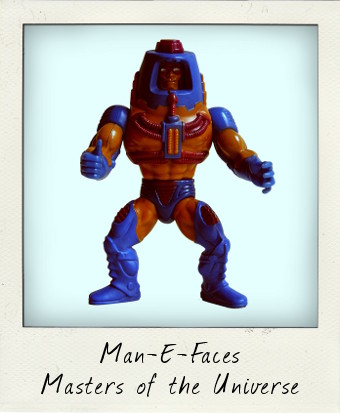 Masters of the Universe, Mattel’s hugely successful action figure line of the 1980s, has proved enduringly popular. Big sellers back in the day, these figures can still be found loose on flea markets for a fair price, like this classic Man-E-Faces 1983 figure (dated stamped 1982) from the second wave of Heroic Warriors from the Original Series, which I picked up just the other day.

Almost all the figures in this line came with a built in power punch action – twisted at the waist and then released, the torso will swivel round at speed, and land a hefty punch – yet this particular figure went one better.

As his name implies (the MOTU line is rife with notoriously cheesy character name puns), “Man-E-Faces” is a multifaceted figure. The TV cartoon’s version of the character, in fact, casts him as an actor cursed with a split personality. By twisting a dial on the top of his head, kids could select one of this character’s “many faces” allowing him to fight as either a humanoid hero, a robot, or an evil monster, making this essentially a three-warriors-for-the-price-of-one deal that few could resist. Browsing many an action figure forum, Man-E-Faces seems to place high in action figure fans’ lists of most loved childhood figures.

With his chunky helmet his height nudges 4 ¾ inches, and as well as his cool face-changing and swivel waist gimmicks, he only has another very limited four points of articulation at the shoulders and hips, but this hardly matters when the other features are so much fun.

Rather predictably my loose figure has lost his orange laser pistol accessory and related mini comics – The Ordeal of Man-E-Faces, but on the plus side, he has hardly any paint wear, and good tight limbs – he’ll still stand happily on his own legs.

The Masters of the Universe – Original Series figures all follow very similar body types and molds, although Man-E-Faces got a unique sculpt with his own muscle-bound torso incorporating tubes and robotic elements connected to his headgear, whilst his lower body with its robotic looking underpants and high boots, and his half-human half-machine arms would later resurface on Roboto and Trap Jaw with different paint jobs.

Even minus his weapon, Man-E-Faces is a fabulous vintage action figure, and a must have for any Masters of the Universe collection!