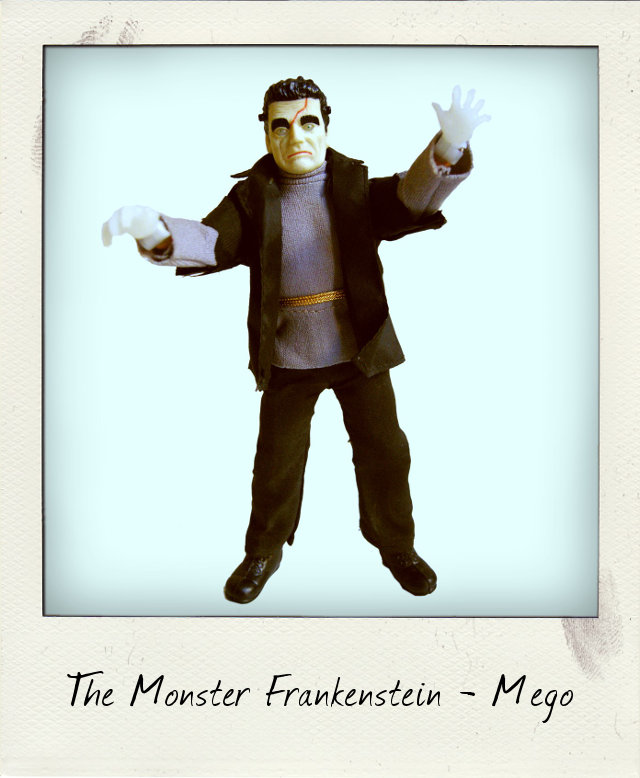 With Halloween nearly upon us this seems like an excellent time to take a look at a recent vintage find that combines of two of my favourite action figure collecting passions – Universal Monsters and Mego. This wonderful Frankenstein Monster was released in 1974 as part of the Mad Monsters series, an offshoot of the hugely popular World’s Greatest Super-Heroes 8-inch figure line. The set also included the Dreadful Dracula, the Horrible Mummy, and the Human Wolfman, and while they may have been unlicensed figures, Mego did a fine job in creating figures as reminiscent as possible of the classic movie monsters.

Indeed, the very first Frankenstein Monster produced by Mego was deemed a little too close to Universal’s copyrighted make up and design, having a distinctly square head. Now nicknamed the “Flat Top Frankenstein”, this initial version was given a swift blue paint job to keep the Universal lawyers at bay, creating another rarity in the process – the “Blue Haired Frankenstein”. My Monster is the definitive Mego “sculpted hair” version, with less of a flat top and black hair. Fans of Boris Karloff’s Frankenstein Monster will also spot that Mego moved the Monster’s famous neck bolts to the sides of his head instead, once again to presumably stay one step ahead of Universal Studios!

As one would expect from Mego, however, the rest of the design is beautifully conceived, from the heavily lined face, with its ghoulish pallor, grim expression, and jagged scar, to his creepy glow in the dark eyes.

The Mad Monsters are most often found with the skinnier Type 1 body with metal joint rivets, with a unique feature being their specially sculpted hands with thin, claw-like fingers that also glow in the dark. The Monster’s suit has also been carefully designed, with the trousers, gold belt and grey sleeveless undershirt sewn together as a one piece outfit, with the sleeves of the undershirt attached to the sleeves of the separate coat jacket. The suit on my figure is still in pristine condition, with the coat lapels still stiff. With Mego’s awesome 14 points of articulation allowing him to be posed perfectly, this is an excellent display piece for Halloween…and all year round!