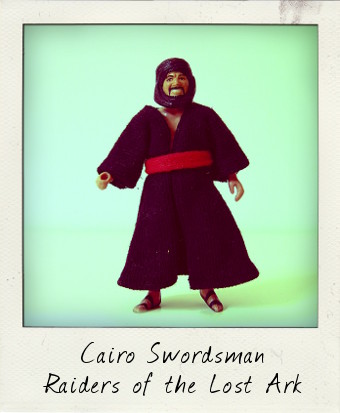 Back in 1982 when Kenner launched its wonderful series of 3 ¾ inch action figures – Adventures of Indiana Jones in Raiders of the Lost Ark – they provided Indy with pretty much all the main villains from the film, allowing kids in bedrooms all over the world to re-enact their favourite scenes. One of those bad guys in particular has acquired almost legendary status, which is remarkable considering he is only actually seen on screen for a matter of seconds! (I’ll assume at this point that anybody reading this post has seen Raiders of the Lost Ark – if you haven’t, stop reading this paragraph – big spoiler alert coming up!) I’m talking, of course, about the Cairo Swordsman, a scimitar wielding assassin hired by the Nazis, who fails to impress Indiana Jones with his fancy sword play and is dispatched unceremoniously by him with a single pistol shot.

The Cairo Swordsman action figure was released as part of the first wave, which also included Toht, Indiana Jones himself and Marion Ravenwood. As with all the male characters in this phase, the figure has 7 points of articulation – in the neck, shoulders, knees and, as with the Toht action figure we featured a while back, that extra wiggly hip articulation. This figure is also a tad taller than the other figures at 4 inches, allowing him to tower menacingly over the other characters in the line.

Sadly, my swordsman has lost his sword, although his black robe and red belt are original vintage accessories that cover his skimpy black loin cloth. The detailing is excellent on this figure too – check out his beard, turban and glowering expression! A must-have action figure for any Indiana Jones fan!