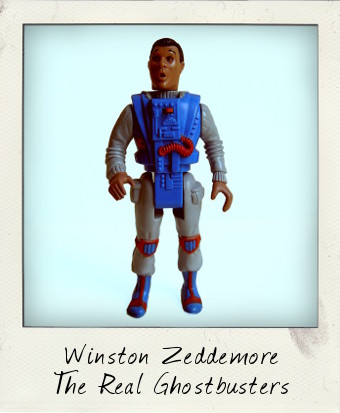 Looking back over this last year of blogging, I noticed that I started the year with a vintage Ghostbusters figure, meaning that nearly a year has passed since I last blogged about one of my favourite lines from the 1980s – The Real Ghostbusters by the legendary Kenner. Let’s set that right straight away with a closer look at this fun 5-inch Winston Zeddmore figure from the Screaming Heroes subset. A hugely popular action figure line that dominated the market until they were knocked off the top spot in the early 1990s by, of all things, a family of Teenage Mutant Ninja Turtles, the Real Ghostbusters figures still turn up loose in thrift stores and charity bins on occasions, which is where I found this Winston just the other day. 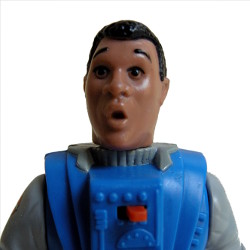 Winston Zeddemore – I ain’t ‘fraid of no ghost!

The main point of curiosity in this series of figures, of course, is that whilst every child of the eighties was singing the lyrics to the movie theme song of Ghostbusters – “I ain’t ‘fraid of no ghost” – their animated cartoon spin-off action figures were depicted in various stages of terror – there was a Screaming Heroes line, a Fright Features line, and even a Super Fright Features line! This Winston, whilst being an excellent cartoon likeness, wears a permanently surprised expression!

The articulation was very basic on these figures, with only five points at the neck, shoulders and hips, but the interactive action features more than made up for this. With this Winston Zeddemore Screaming Hero, for example, in addition to his Proton Pistol weapon, he was also issued with a big plastic Houndhowl Ghost that would attach to his back. If you then wound his head and pressed the red lever on the front of his chest, his head would spin and there would be a screaming sound from the ghost attachment! Sadly my loose Winston has lost his ghost and weapon accessories, but the head spin still works really well, meaning he can be posed in all sorts of weird 360° head turn positions. His legs also seem to kick during the head spin, as if jumping in surprise!

Another curiosity, and a frequent error with this character, on the packaging Kenner spelled his name incorrectly missing out the middle “e”: Connect Houndhowl and hear Winston Zeddmore scream!

Whilst the figure may have been released in 1989, he is actually date stamped 1988 on the back of his right thigh, alongside the Kenner and Columbia pictures copyright info, with the country of origin China stamped on the left.

The paintwork is still in excellent condition and Winston’s all important Ghostbusters logo decal is still intact on his right sleeve, just below the shoulder. The Ghostbusters ghost symbol was based on an idea originally proposed by Ghostbusters inventor Dan Ackroyd, and realised by art designer John DeCuir, Jr. It is instantly recognisable and one of most successful movie logos of all time – make sure any loose Ghostbusters figures you buy still have their logo and be careful when cleaning vintage figures as transfers tend to be more vulnerable to wiping with a damp cloth than paint.

All together now …“Who Ya Gonna Call?!” Collect all the Ghostbusters figures – you KNOW you want to!