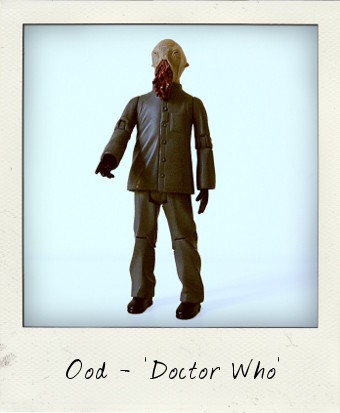 With Doctor Who Season 7 Part 2 now well under way on BBC television with Matt Smith’s eleventh incarnation of the Doctor officially joined by new sidekick Clara Oswald portrayed by Jenna-Louise Coleman, and news buzzing throughout the Internet of the return of David Tennant and Billie Piper in a super-duper fiftieth anniversary special to air at the end of 2013, I thought it might be fun to take a closer look at a Doctor Who action figure.

Last summer I visited the hugely enjoyable interactive Cardiff Bay Doctor Who Experience – a must-visit exhibition for any Whovian – and got to see the original costumes, props and aliens from the show up close. 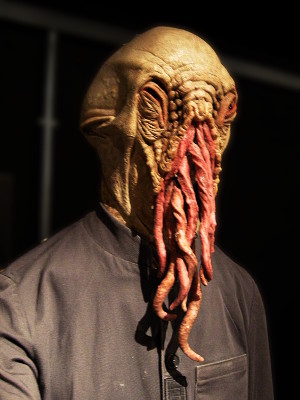 The Ood at the Doctor Who Experience

I took a lot of photos of the exhibits, including one of a revamp-era alien, the Ood. The Ood are an alien Squid-faced species with telepathic abilities, with an appearance that falls somewhere between Squid Head from Star Wars and Futurama‘s Doctor Zoidberg! First appearing in Series 2 in 2006 in an episode entitled The Impossible Planet, they continue to pop up from time to time.

Seeing the original Ood sculpt in the flesh in Cardiff made me realise what an astounding job toy makers Character Options did when they created their action figures – the likeness is utterly faithful and looks like the original was magically shrunk to five inches tall, with all the wrinkles, fleshy-looking tentacles, and even speckled scalp faithfully rendered. The costume, too, which is molded in a softer, rubbery plastic, is spot on. 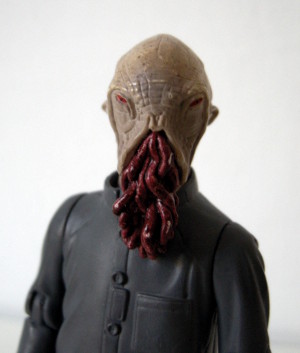 The Ood figure is also packed with articulation: the head rotates, although the tentacles limit that to about 90 degrees; the shoulders rotate a full turn; there are hinges at the elbows and knees; the waist and wrists swivel a full 360 degrees; and, finally, there are ball joints at the hips allowing our Ood here to perform the splits. Thankfully his jacket prevents me from posing him in such an undignified position!

Copyright information is discreetly found on the soles of his feet with “© BBC 2005” on one foot and “Licensed by BBC Worldwide Limited” on the other.

The Ood don’t have vocal cords and instead communicate via a Translation Orb, which is attached to their mouths via a tube, and can on occasions double up as a weapon if thrown. My loose figure has sadly mislaid this accessory, but this is nevertheless a great Doctor Who figure to own. Many thanks to my sister who mailed me this figure with a box of goodies!

For completists and variant collectors check out the version of this Ood figure with glow in the dark eyes and translation orb.