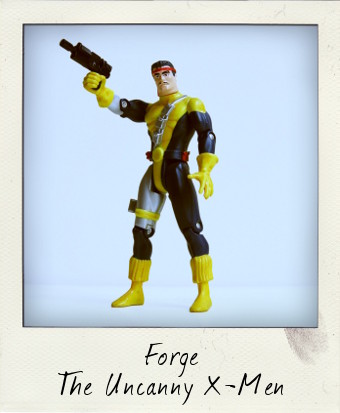 The Internet has been a-buzz this month with X-Men news as work started on X-Men: Days of Future Past with some of the movie’s stars spotted in Montreal for filming. Excitement has also been fuelled by director Bryan Singer tweeting some great behind-the-scenes photos (@BryanSinger), and a brilliant April Fool’s Day Tweet that Lady Gaga would be joining the cast! Erstwhile Twilight actor Booboo Stewart has been enlisted – probably as Warpath – although early speculation had cast him as a young version of another Native American X-Men character, Forge. Which all gives me an excellent excuse to dig out another Toy Biz Uncanny X-Men figure from the 1990s!

I’ll admit, this variant of Forge had me confused when I first found him. Date stamped ©1992 Marvel Comics he looks almost identical to the The Uncanny X-Men Original Mutant Super Heroes line which was issued that year, except that there are some notable colour differences. In the 1992 version his boots and ammunition belt are brown, whilst his bionic right leg and forearm are cast in translucent blue plastic with cybernetic bits and pieces inside. There were two versions of this figure – one with a yellow gun holster and another with a rarer brown holster. 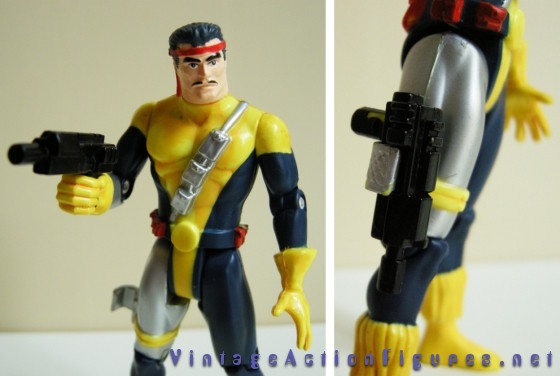 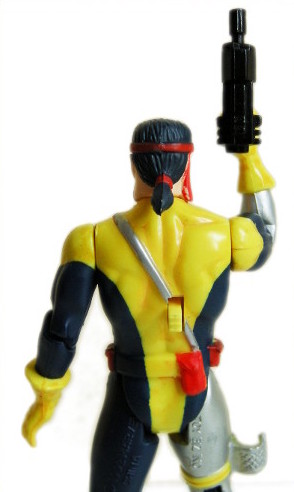 The sculpt is a perfect comic book likeness of Forge, with great attention to detail in the body too, with his simple nine points of articulation (at the neck, shoulders, elbows, hips and knees) augmented by a very cool action feature – the Quick Draw Action! If you pull his gun arm down and clip it into the holster, it can then be released by flicking a switch in his back. The release mechanism is so strong, in fact, that my Forge always ends up with his gun pointing at the ceiling!

Toy Biz were clearly so pleased with this version of Forge, that they merely gave him a new paint job when he was reissued as part of a Strike Team box set of 8 figures in 1998. If it ain’t broke, as they say, don’t fix a great action figure! Gone are the translucent blue parts, which have become opaque silver, as has his holster and ammo belt, with the boots changed to yellow. In fact, the new colours perfectly reflect his costume change in Issue #275 of the Uncanny X-Men. 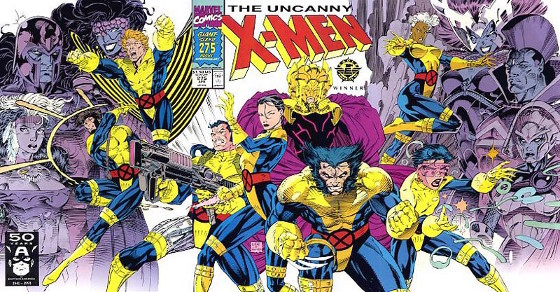 All the X-Men figures in this bumper set were issued with large, red belts – made of cloth, not plastic – but sadly my loose figure has lost his. Thankfully his weapon slots tight into either his fist or leg holster and would be harder to mislay.

The accompanying figures in the set were Talos, Wolverine, Super Skrull, Banshee, Storm, Gambit, and Jubilee. Collect them all…you KNOW you want to!