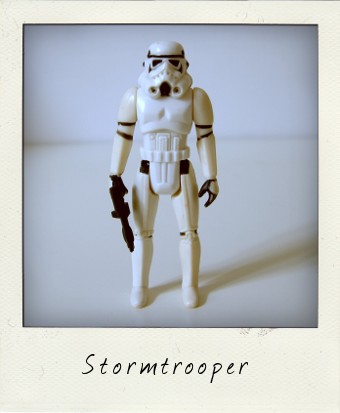 Kenner’s sculpt for the Star Wars Stormtrooper (later renamed Imperial Stormtrooper on the repackaged The Power Of The Force card back) was one of its most accurate action figures. Like many of the vintage Star Wars figures there are, however, minor variations in moldings and even stance – collectors should keen an eye out for varieties that may fly under the radar of less-informed sellers. 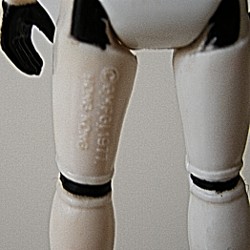 I was delighted to spot this wide stance Stormtrooper variety in an auction recently – dated 1977 this figure would have been first available in 1978 and is stamped Hong Kong and © G.M.F.G.I. (General Mills Fun Group Inc, a subsidiary of General Mills, a company that had acquired Kenner back in 1967), with the lettering going down the leg on two lines.

Whilst being an identical sculpt, this version of the Stormtrooper has a higher quality cast with finer, sharper details visible, and in particular, a raised middle bobble on left knee. The figure is in overall very good shape with only a little yellowing of the plastic on the arms and legs, with the torso and head still bright white in colour. The Stormtrooper Blaster is also a vintage original.