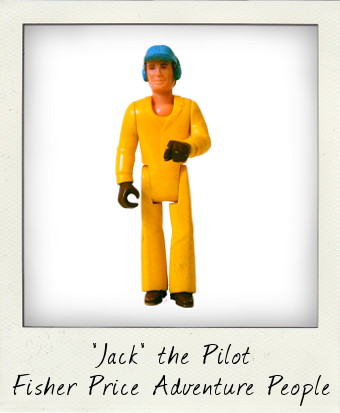 If vintage action figures and toys can indeed be viewed as part of the cultural record of earlier decades, then for me personally, no figures scream “1970s” louder than those wonderful Fisher-Price Adventure People! Available for about a decade from 1975 onwards, more than 70 different figures were eventually released – mostly, but not exclusively, male figures sporting stylish flared trousers, like this very early Jack the Pilot here, date stamped 1974. These solidly built 3¾ inch figures were aimed at encouraging kids’ interest in exciting jobs and played on the intrinsic glamour of adventurous or dangerous occupations – years before Village People took YMCA to the top of the charts the Fisher-Price Adventure People already had a Construction Worker, Biker, Cowboy and Policeman on the team!

Jack the Daredevil Sport Plane Pilot - back of figure

By changing just a minimum of details – sunglasses, helmets, facial hair and decals – Fisher-Price were able to create a plethora of entirely new characters. Jack the Pilot, for example, wears a yellow long-sleeve jumpsuit with a red circle transfer on his back that has a plane symbol in the center, a blue ballcap and earphones, whilst other pilots were available with short sleeves and different coloured helmets and visor, as well as being produced in both Caucasian and African-American versions.

Like all the other Adventure People figures, this pilot has the standard 5 points of articulation at the shoulders, hips and head, with its special cut joint allowing it to turn 360 degrees – VERY helpful for a pilot – and an additional ball joint which permits the head to nod up and down too.

It can come as no surprise that Fisher-Price also grasped the full potential of playsets and accessories with this line of figures, and right out of the gate they released 4 sets – Safari, Rescue Truck, Rescue Copter and Sport Plane. The Daredevil Sport Plane was simplest of the four sets and consisted of a single seat airplane with black propeller built especially for Jack the Pilot and available in two colour schemes – orange on top with white below or vice versa. Hours of fun!