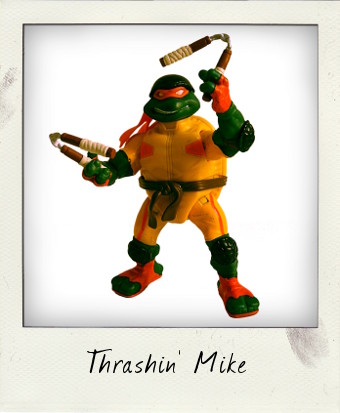 When Teenage Mutant Ninja Turtles reappeared on the small screen in 2003 in a relaunched animated TV show Playmates Toys picked up their old license and resumed production of their legendary TMNT action figures, raising the bar with every new figure set with increasingly clever and inventive toys.

Their range of solidly constructed action figures were also built to survive heavy play. This particular 5 inch figure, for example, was part of an accessory-packed set of figures from that same year – the Extreme Sports line – which kitted out the turtles in helmets, knee and elbow pads, to protect them whilst scooter riding (Leo), BMX riding (Don) in-line skating (Raph), and in the case of Mike here, skateboard surfing. 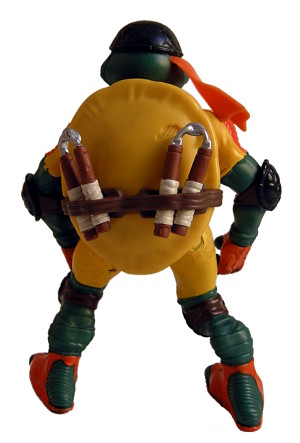 Thrashin' Mike with his nunchakus

The attention to detail is impressive – this version of Mike actually does look like his animated cartoon version. Wearing his trademark orange mask, Michelangelo is also dressed in rather less familiar yellow sports gear with orange details – I love the way the sleeves have been jaggedly torn away – with a black “Ninja Noggin” protector on his head, which looks very much like a recycled leather football!

The articulation isn’t at all bad on this figure with nine points in total: a 360° head turn, ball joints at the shoulders and hips, as well as extra cut joints at the elbows and wrists, allowing him to be posed dramatically with his trusty weapons of choice, a pair of nunchakus. There is no articulation at the knees, which is a pity, but this is presumably to help keep him steady if positioned on his main extreme sport gimmick – a “Rolling Ninja Skateboard”! My Mikey has mislaid his skateboard, but he still has both his nunchakus – thankfully, they were still tucked safely away in their special slots on the back of his belt.

An excellent addition to any Teenage Mutant Ninja Turtles collection!