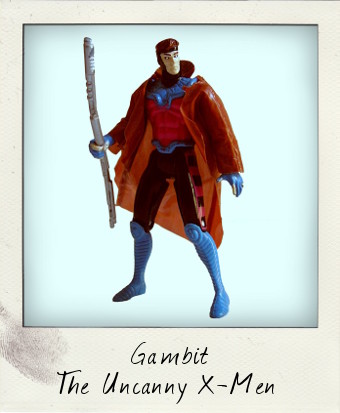 I recently watched X-Men Origins: Wolverine on DVD and was reminded of this 1992 Uncanny X-men figure of Gambit, the human mutant whose kinetic energy powers, card-throwing skills and wicked moves with his trusty bo staff are given quite a showcase in that movie, the first of the X-Men series in which he has appeared. Whilst Taylor Kitsch’s portrayal of Remy LeBeau was a good match for the smooth talking Marvel Comics Gambit, this Toy Biz action figure, however, was clearly aimed at being a perfect likeness of Gambit as seen in the Fox Network kids cartoon X-Men: The Animated Series, which started airing in October 1992.

Issued as part of the third series of Uncanny X-Men alongside two Wolverine variations, Banshee, Sauron and Magneto, this 4 ½ inch Gambit is a fun figure. The articulation may be limited by today’s standards with articulation at the neck, shoulders, elbows, hips and knees only (with upper body moves somewhat impeded by his plastic brown mac), but this Gambit has a special action feature that more than makes up for this – a “Power Kick Action”. The plastic coat has a hole cut in the back to reveal a small button – flick this switch and Gambit will pull out one of his lightning fast karate kicks – or even can-can for you!

The trench coat accessory can be removed, but with difficulty – I haven’t tried for fear of tearing the plastic – although with the coat’s high collar a molded feature incorporated into the figure itself,  he looks a little odd if he isn’t wearing it. On the positive side, the difficulty in removing the coat, and also the bo staff weapon, which is firmly wedged in his fist, has allowed many of these loose figures to survive twenty years with accessories intact.

The paintwork is also good – I like the attention to detail on Gambit’s gloves, for example, with their missing fingers, although his irises should strictly be red, not white, but this a minor quibble. All in all, a fun figure and a must have item in any X-Men collection!