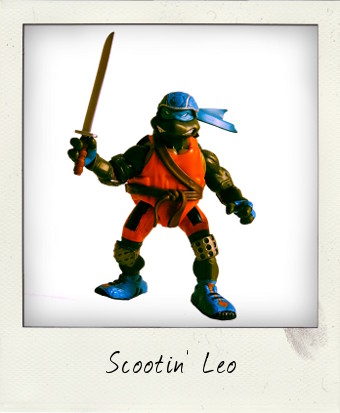 With the resounding success of the 2012 Olympics Games and the record-breaking attendance figures for the thrilling Paralympic Games which are currently taking place in London I thought a vintage sporting action figure was in order.

Working on the premise that when it comes to Teenage Mutant Ninja Turtles MORE is quite definitely more, here is another figure in the accessory-packed Extreme Sports line from 2003. These 5 inch Playmates figures saw everybody’s favourite reptiles decked out in all manner of protective headgear, elbow and knee pads, and ready to show-off their BMX riding (Don), in-line skating (Raph), skateboard surfing (Mike), and in case of Leo here, scooter riding. 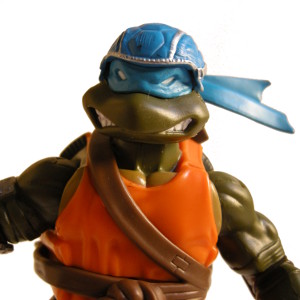 True to Playmates Toys‘ high standards of excellence, this Scootin’ Leonardo is another example of a well designed action figure with plenty of articulation, which was also solidly built to withstand some serious play.

Looking very much as he appeared in the relaunched animated TV show that year, this mean-looking Leo was issued with several accessories: his trademark twin Katana swords (which can stow away safely in the sword scabbard on his back); a snap on visor; and of course, a Turtle Scooter with real rolling wheels. I quite literally just found this loose figure on a Rome market stall this morning – he’s in great condition, but has lost his visor and must have left his scooter parked unchained somewhere, as he’s lost that too! Thankfully, he was still brandishing one of his swords! 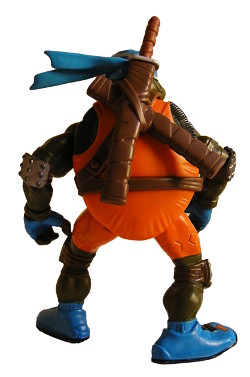 Scootin’ Leo – sword scabbard on back

As with all the figures in this line, Leo is kitted out in special sports gear – I love the way his orange vest appears to stretch right over his shell, and the “Ninja Noggin Protector” helmet looks to be made from a recycled football, from which he has also fashioned a pair of matching gloves. Each of the elbow and knee pads are also molded to look as if they are made from completely different scraps of metal.

Articulation is pretty good too, with nine points in total: full 360° turns are possible with the head and ball joints at the shoulders and hips, and there are also cut joints at the elbows and wrists making him easily poseable. Some knee articulation would have been nice, but I’m just being extra picky!

A fun addition to any TMNT action figure collection. Collect them all…you KNOW you want to!