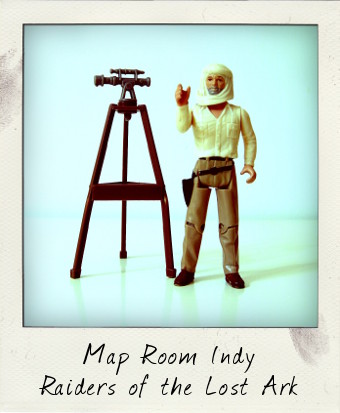 This 1982 Kenner Indiana Jones action figure shows our hero not in his usual brown leather jacket and fedora hat, but in the desert disguise he wore in the map room in Raiders of the Lost Ark when Indy discovers the secret location of the Well of the Souls aka the final resting place of the Ark of the Covenant.

This figure was released exclusively with the Map Room Playset and originally came dressed in a removable robe. The provided accessories gave kids everything they needed to re-enact the scene – a grappling hook, tri-pod, pick, book, rope, satchel and pistol, not to mention the all important Staff of Ra complete with headpiece, which is the key to locating the covenant, as well as the scale model of the city of Tanis.

The Kenner Indiana Jones action figure packed 7 points of articulation into its 3¾ inches : neck, shoulders, knees and more unusually, hips. Compared to the limited stiff legged articulation of Kenner’s Star Wars models that forced figures to goose-step, Indiana Jones and the other Raiders of the Lost Ark action figures positively swivel at the hips! He’s solidly built and still in great shape and unlike with the Hasbro G.I. Joe figures, no rubber bands were used that might eventually need replacing.

Indy also came with a quick draw action arm, a pull back quick draw action that allowed him to draw his gun, or if used in reverse, crack his whip over his head. The only problem with this is that the quick draw arm is always raised and ready for action – if you no longer have the pistol or whip accessories Indy looks like he’s permanently signalling to the barman that he’d like a drink!