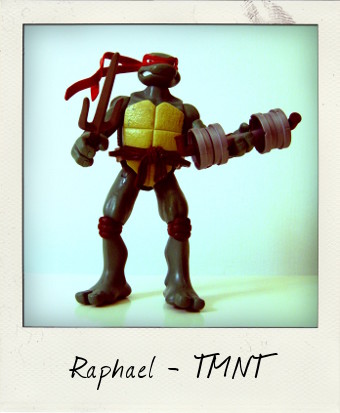 When Mirage Studios relaunched the animated TV series Teenage Mutant Ninja Turtles in the early noughties and needed somebody to create tie-in action figures for the new millennium, Playmates Toys – who had created the first waves of TMNT action figures in the late 1980s – stepped up to the mark once again and created a huge assortment of often quite ingenious Turtles.

Likewise, when in 2007, the Imagi Animation Studios made the fourth Teenage Mutant Ninja Turtles movie – TMNT – created entirely using CGI effects, rather than live-action footage, it was Playmates who released a line of tie-in action figures with excellent CGI movie likenesses. Hitting the shops in time for Christmas 2006, these figures gave collectors a first look at the new computer-generated Turtles. 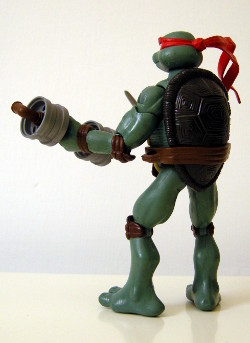 This Raphael figure was a recent surprise find lurking at the bottom of a mixed bag of Turtles on a thrift stall. Amazingly, he still had one of his trademark twin sai swords and one of the pair of dumbbells that came with this figure – with hand sculpts that actually hold the accessories in a perfect grip, he displays really well.

Issued as part of the first film wave –TMNT Movie Heroes – alongside his reptilian brothers Donatello, Leonardo and Michelangelo and Turtle allies April O’Neil, Casey Jones and Splinter, this 6-inch figure is a handsome fellow. He is solidly built, with extra attention having been paid to the joints to improve articulation – the arms, for example, have both a ball joint at the shoulder and a cut joint just below it, as well as elbow and wrist movement. There are also some nice design touches such as the back of the figure with Raph’s patterned shell, the belt loops for his sai swords and the softer, rubbery plastic of his red bandana. He is molded in a cool grey-green plastic which is spot-on for this movie version.