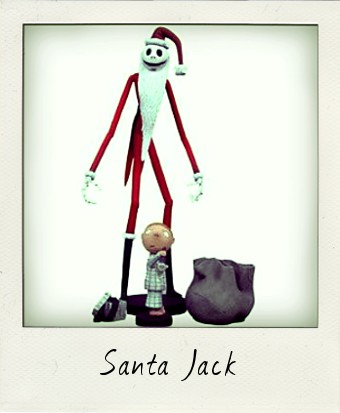 Christmas is almost upon us so here’s a seasonal look at a classic Christmas-themed action figure – Santa Jack from Tim Burton’s The Nightmare Before Christmas, released in NECA’s second wave of 7 inch action figures for the film.

For those of you who haven’t seen the stop motion masterpiece, Jack Skellington is the Pumpkin King of Halloween Town, a creature more skilled at spreading terror during Halloween than joy at Christmas time! This all changes when he accidentally discovers Christmas Town, however,  and this figure shows him dressed as Santa in his efforts to embrace Christmas!

True to their usual exacting standards, this NECA figure is highly detailed and fully poseable and complete with accessories – in this case, Santa’s sack of gifts and the frightened little boy who receives a shrunken head as a gift from Jack!

The series ran to 6 action figure waves (each wave featuring four figures) from 2000 onwards and throughout most of the “The Noughties” but are not currently in production, so whilst not strictly vintage, NBX action figures are still highly collectible.