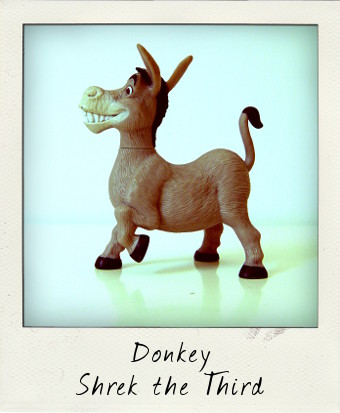 With the final chapter in the Shrek movie series Shrek Forever After hitting cinemas worldwide tomorrow I thought it might be fun to take a look at one of the action figure gimmicks that was released in 2007 to coincide with the last Shrek film.

When Disney and the McDonald’s restaurant chain finally parted ways in 2007 the Disney gap was quickly filled by a major merchandise marketing deal with DreamWorks Animation tied to the launch of Shrek the Third. In a move that presumably addressed some of Disney’s (rumoured) concerns about the impact of McDonald’s fast food on childhood obesity, this time around the Shrek toys and action figures would be available with Happy Meals with a new healthier menu including …wait for it…fruit and vegetables, low-fat dairy products and fruit juices! To add further weight (no pun intended) to DreamWorks’ commitment to the problem, the Shrek the Third characters also appeared in a US Dept. of Health & Human Services commercial regarding Childhood Obesity Prevention.

As a vegetarian for all of my adult life I haven’t collected many Happy Meal toys, but do happen upon them fairly often on market stalls, which is where I found this Donkey the other day. Donkey was the third in the set of eleven figures in this edition of what was also McDonald’s first set of talking toys. There is an On and Off switch on his tummy. When it’s on and his tail is moved he says: “SHREK!!!” and then does the Eddie Murphy chuckle. I’ve read elsewhere that he’s also supposed to say “Are we there yet?” and “Peek-A-Boo” – mine doesn’t,  so possibly this is a European variation minus the English language phrase. If anybody has any extra information please feel free to leave a comment below!

Meanwhile, here’s the full list for anybody who wants to track them all down!