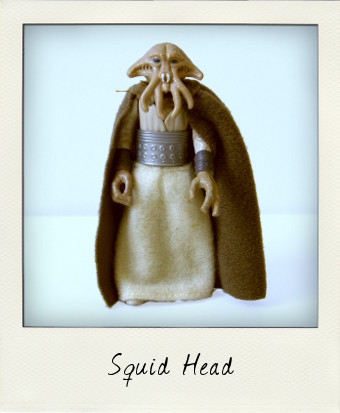 If poor old Walrus Man was a rare example of a Kenner Star Wars action figure which saw the toy company cutting corners on movie-likeness accuracy in the design, their work on Squid Head shows just how good they could be when at the very top of their game. Making his first outing on the Return Of The Jedi 65 back cards in 1983, this may be a later figure in the Star Wars original trilogy figures, but he’s certainly on my list of must-haves thanks to the sheer attention to detail.

And if don’t remember him from the movie…? Don’t feel bad – you may well have blinked when he appeared as an extraterrestrial extra seen in the background when Luke enters Jabba the Hutt’s palace!

Squid Face – later known as Tessek, a Quarren from the ocean planet Dac, when George Lucas went all politically correct on us and eliminated those insensitive nicknames – was stylishly dressed, issued with not only a brown fabric cape, but also a white fabric skirt and a huge silver belt which might have made even Elvis envious! Even his Bespin Blaster was molded in grey to match the cuffs and belt on his outfit. Sadly my Squid Head has lost his weapon, but apart from this is still in great condition with very stiff limbs. 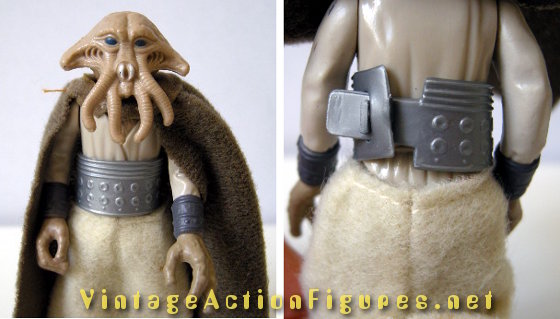 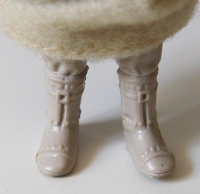 The facial sculpt is perfect too with a variety of differing textures rendered: the ridges on his tentacles, the deep groves of his gills, and the leathery-looking elephant skin of his scalp. Lifting the skirt there are even more hidden details to enjoy – he’s also sporting a nifty pair of white boots. The country of origin (Hong Kong) is abbreviated to “Made in H.K.” and runs upwards on the back of the right thigh, with Lucas Films Ltd. and the date indicated by “© LFL 1983” running upwards on the left.

There are no major variations with this figure, although some versions do seem to have much lighter eyes – this would be the “darker” blue-eyed version. Cape colours can also vary very slightly, but nothing that constitutes a true variant as such.

This is an essential item in any Star Wars collection!