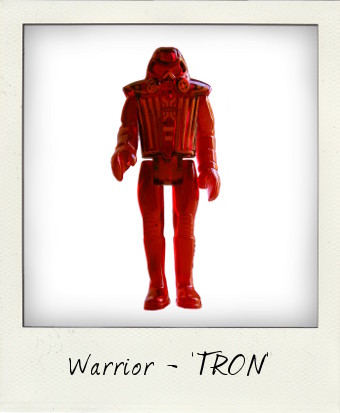 When Walt Disney released the science fiction movie TRON in 1982 its special-effects and computer animation were seen as ground-breaking. A moderate box office success on its release, TRON has since achieved cult status, and the film is often cited as being the inspiration behind the CGI effects and computer animation in today’s blockbusters. Pixar boss John Lasseter has even claimed that “without TRON there would be no Toy Story.”

TRON was, of course, the perfect movie for a tie-in marketing franchise, with home video and arcade games the obvious spin-offs, as well as comic books and an animated television series too. After Kenner’s hugely popular Star Wars action figure line, a series of 3 ¾ inch action figures was another a must-have TRON marketing item. 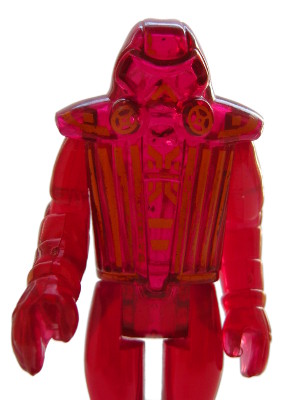 The original TRON action figures – Tron, Flynn, Sark, and Warrior here – were released in 1982 and created by TOMY, a company previously known for its wind-up toys. It’s surprising, therefore, that there are no wind-up parts and that the figures are actually rather limited in articulation with only shoulders and hips moving – my Warrior doesn’t even move at the neck. These figures had something else, however, which continues to make them look utterly cool today – they were cast in translucent plastic. Warrior and Sark were a raspberry red colour, with Tron in purple and Flynn in blue. All the figures have excellent movie-accurate painted markings, although they did tend to suffer from paint wear. My Warrior is in pretty fair condition and his limbs are nice and tight. The production run was a short one so I’m thrilled to have tracked one down at all!

The Tron, Sark and Flynn figures were also issued with glow-in-the dark discs which would slot in their backs, whilst Warrior was issued with a glow-in-the-dark staff accessory, although I don’t hold out much hope of ever tracking one of those down! 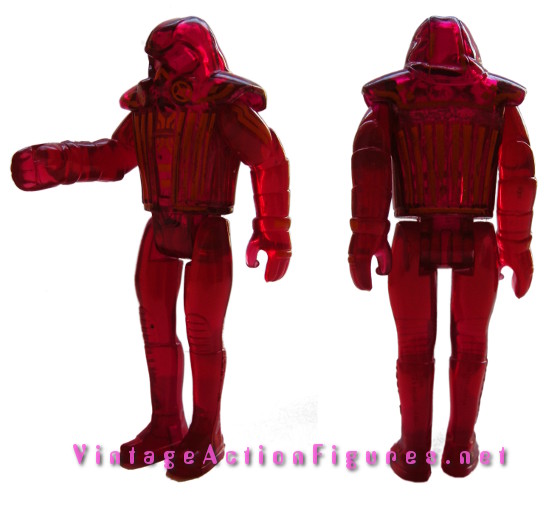 “…from the futuristic world of the movie TRON”

For the 20th anniversary of TRON in 2002, NECA re-released several of Tomy’s 1982 action figures. These figures appear to have been darn near identical to the original figures so double check the copyright information on the back of the legs if you happen upon a vintage TRON figure. On my Warrior it reads “Tomy Japan” on the right calf, with “© 1981 Walt Disney Prod.” running downwards on two lines on the left calf.

The original TRON figures are still hugely collectible to this day. If you love TRON – and who doesn’t? – these figures are essential items in any vintage 1980s movie memorabilia collection. Collect them all … you KNOW you want to!