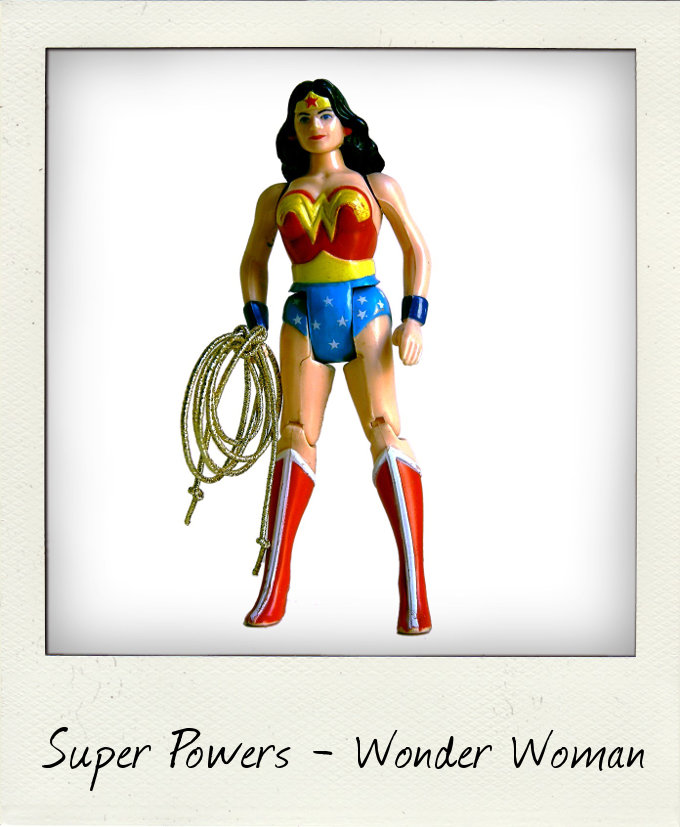 The Super Powers Collection by Kenner remains one of my favourite 1980s toylines. These perfectly designed vintage figures were so well constructed that some thirty years after they first hit toy store aisles their secret built-in “super power action” features almost always still work. Wonder Woman has long been top of my list of must-have figures in the line so I was thrilled when I tracked one down in full working order recently. She was missing her Magic Lasso accessory, but this particular vintage part proved very easy to reproduce. In DC Comics lore the original lasso was forged by the god Hephaestus from the Golden Girdle of Gaea. Thankfully our prop merely required a quick trip to the local haberdashery for a short length of thin gold cord, which was then looped around itself and tied with a knot, to create a home-made Lasso of Truth. For display purposes it’s extremely hard to tell the difference from the original part.

Wonder Woman may have been the only female figure in the entire Super Powers Collection, but she was certainly considered important enough by Kenner to have been featured alongside other DC Comics major names such as Batman, Superman and The Flash in its first wave of figures issued in 1984, and remained in production throughout the brief lifetime of the line, which saw the release of a second and third wave of figures in 1985 and 1986 respectively.

Wonder Woman aka Princess Diana aka Diana Prince, to quote the back of the original Kenner packaging:

“Glides on air currents, superhuman strength, extraordinarily acute senses, uses her tiara as a a weapon or boomerang, has a magic lasso that forces those bound with it to obey her commands. Can bounce bullets off her bracelets.”

Most of those super powers would be tricky to pull off in a 4 inch action figure, but always ready to meet a challenge, Kenner devised the “Power Action Deflector Bracelets” feature whereby squeezing her legs together activated the crossed-bracelets bullet-deflecting pose. In addition there were the usual standard points of articulation at the neck, shoulders, hips and knees.

As with all the figures in the Super Powers Collection the sculpt and design are excellent, with this model based closely on the iconic Bronze Age Wonder Woman artwork by José Luis García-López outlined in the 1982 DC Comics Style Guide.

In addition to the lasso accessory, the figure was also packaged with the usual mini-comic which saw Wonder Woman called to the rescue of none other than Superman against enemy Brainiac.