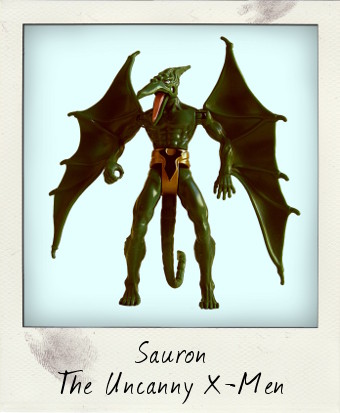 When Marvel Comics launched a new super-villain in 1969 to do battle with the X-Men, writer Roy Thomas and artist Neal Adams found themselves with the tricky task of inventing a monster that would pass the strict rules of the Comics Code Authority, a 1950s body that still censored depictions of horror or violence in comics and even banned the use of centuries old legendary figures such as vampires and werewolves. Necessity, as they say, is the mother of invention, so Thomas and Adams brilliantly skirted regulations by creating Sauron – alter ego of Karl Lykos – based on a Pteranodon, a prehistoric flying reptile from the Pterosaur family. Whilst werewolves were strictly off-limits, were-Pterosaurs apparently were just fine!

Fast forward ahead to 1992 when the Marvel villain Sauron was given his own action figure as one of the Evil Mutants in the Uncanny X-Men line by Toy Biz. A year later this 4 ¾ inch figure was repainted and repackaged on new a blister which had dropped the word “Uncanny” from the front of the card (but not, curiously, from the back) and swapped Sauron’s original orange underpants for a new pair of gold lame shorts with a black design on the front – very stylish! 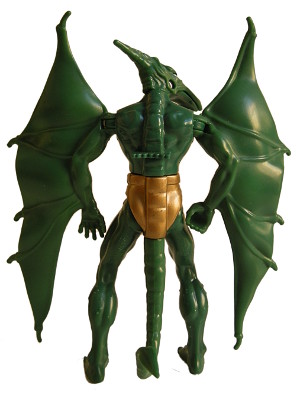 Back of figure with twist-action thumb rest

Featuring a special “twist-waist action figure with moving jaw and super poseable wings” this Sauron figure really delivered on the articulation front, with eight points in total: at the neck, jaw, shoulders, waist, hips and even tail. The back of the figure has a place to rest your index finger or thumb to help you swivel his hips from side to side, so he can brandish his battle club accessory (sadly missing from my loose figure) and swipe his opponents with his huge wings. The ball jointed shoulders will turn a full 360 degrees allowing him to flap his wings or be posed dramatically with wings outstretched.

The articulated jaw is another fun detail and a first for this line. Whilst he may look fearsome with his beak open, however, trusty Wikipedia informs us that the prehistoric Pteranodon actually took its name from the Greek for “wing” and… “toothless”, a detail that would surely have pleased the board of the Comics Code Authority!

A must-have addition to any X-Men collection!