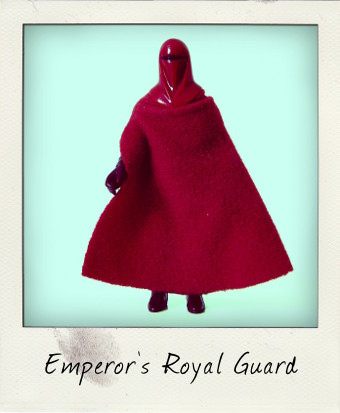 Whilst thinking about today’s post I noticed that this blog has been rather light on vintage Star Wars action figures for a couple of months, so lets correct that situation right away with a look back at an absolute gem – the Emperor’s Royal Guard. First appearing in 1983 on 65-back cards in conjunction with the release of Return of the Jedi, the Emperor’s Royal Guard illustrates the attention to detail Kenner dedicated to each and every character in their 3 ¾ inch Star Wars series and is as near to perfect as can be.

A deceptively simple action figure at first glance, with its masked movie-accurate face, it was issued with both an outer and inner cloak; these fabric accessories were never designed to be removed – in fact, they are pretty well impossible to take off without willfully ruining the figure – yet the maroon figure mold beneath is fully detailed, with pleats and a quilted-look pattern in the trousers, as well as a drawstring rope belt around the waist. 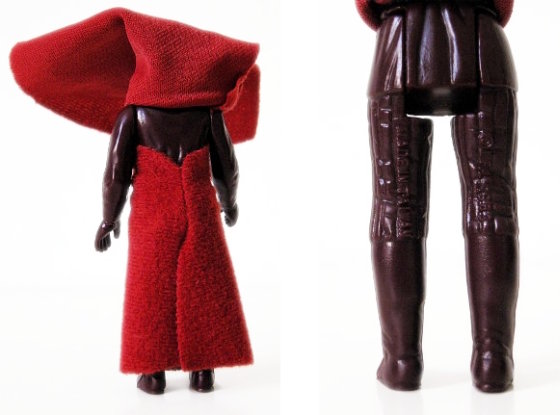 I’ve lifted the cloaks as far as possible without doing any damage to reveal the country of origin and copyright information – “Made in Taiwan” written in full and running downwards on the back of the left thigh, with Lucas Films Ltd. and the date indicated by “© L.F.L. 1983” running downwards on the right. His weapon, on the other hand, a Force Pike, was evidently a lot easier to lose and my figure is sadly missing this accessory.

There are seemingly only minor variations with this particular Star Wars figure and they centre around differing shades of plastic for the helmet which vary from a reddish-orange to a rich dark red (as seen here).

Another unbeatable action figure and must-have in any Star Wars collection!