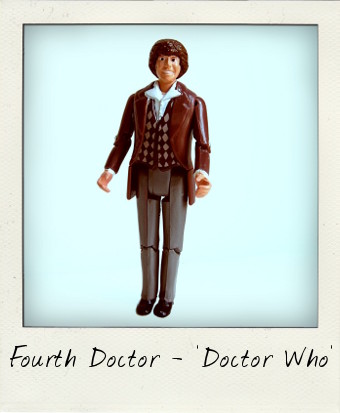 The BBC television science-fiction series Doctor Who, which will celebrate its fiftieth anniversary next year, owes its longevity in great part to a very clever device the writers dreamt up decades ago – when the Doctor is close to death he can regenerate into a brand new body. This has allowed a series of completely different actors to play our hero over the years, from the 1960s when William Hartnell as the First Doctor changed into the Second Doctor played by Patrick Troughton, right through to the present day and Doctor number Eleven as played by the rather wonderful Matt Smith.

Whilst Tom Baker, the Fourth Doctor may not be the very first Doctor I remember – that honour goes to his predecessor Jon Pertwee – the wonderfully eccentric and flamboyantly dressed Baker is certainly the Doctor I recall best from my childhood. The longest-lived incarnation of the Time Lord, appearing in the show from 1974 until 1981, he is still at the top of many people’s list of best Doctors ever, coming second only to David Tennant’s recent portrayal in the revamped series. (Check out my Squidoo lens and Vote for YOUR favourite Doctor Who of all time! ) 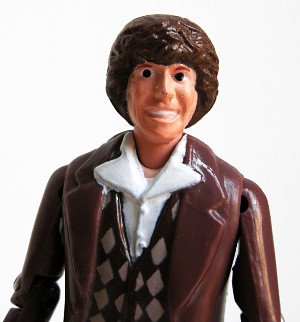 Tom Baker as The Fourth Doctor

This 3 ¾ inch Fourth Doctor action figure by Welsh toymakers Dapol appeared in 1988 as part of a somewhat rushed second wave of Doctor Who toys, alongside Ace (who?!), a Cyberman, Ice Warrior, and the character who had struck the greatest fear into the hearts of kids of my generation – Davros, creator of the Daleks!

Whilst Dapol did a fair job in capturing an accurate likeness – the curly hair, boggle-eyed expression and toothy smile are unmistakably reminiscent of Tom Baker – disappointingly this figure was issued with no additional accessories, so he’s not wearing his trademark long scarf. The paintwork doesn’t really bear close inspection and is a little splodgy on the face, but the articulation is pretty good with nine points at the neck, shoulders, oddly double-jointed elbows, hips and knees.

In spite of its minor imperfections this is still a fun action figure and Dapol collectibles remain must-have items for the vintage Doctor Who collector!