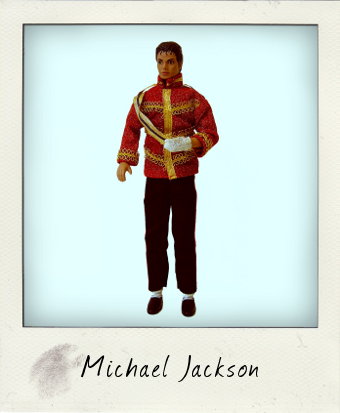 Sooner or later every toy blogger must face the million dollar question when it rears its ugly head – is that an action figure…or is it a DOLL?! Reis O’Brien provides what is possibly the last word in the action figures versus dolls debate over at About Action Figures, and by his standards, our Michael Jackson here teeters dangerously on the edge of doll-dom – to make things worse, LJN Toys, whose wresting figures and Thundercats lines are 100% in the action figure camp, even used the D-word in their television commercials for this Michael Jackson figure! With the second anniversary of MJ’s untimely passing coming up this Saturday 25 June, however, I thought this would be a great occasion to look back at this wonderful piece of Michael Jackson memorabilia, issued at the very peak of his career in 1984. 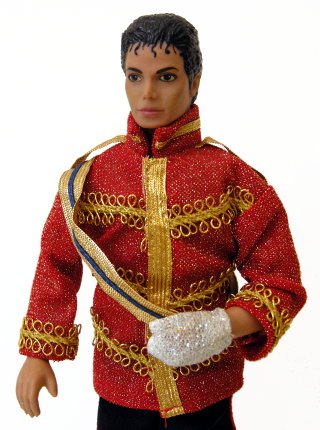 For those of you who don’t recognise the outfit, the 12 inch figure depicts Michael Jackson in the costume he wore at the American Music Awards on 16th January 1984, when the album Thriller scooped numerous prizes – incidentally, MJ was wearing a black, not a white, glove on the night, or rather “glittering Magic Glove” as it was described on the original packaging. He was also wearing his trademark Ray-Ban sunglasses, but I am really happy that LJN decided to let us see Michael’s entire face – the sculpt is just perfect. The figure was also issued holding a microphone accessory, although sadly my loose figure has parted company with his, although his shoes and glittering white socks are, remarkably, still on his feet.

The head, arms and hands are made of a soft vinyl plastic, whereas the body and legs are molded in hard plastic, with eight points of articulation at the neck, shoulders, waist, hips and knees: 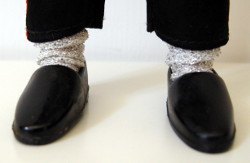 Three other officially licensed figures in the series were produced that year in conjunction with MJJ Productions – Michael wearing his Grammy Awards costume, Thriller and Beat It outfits, with costumes available separately too.

Collect them all – you know you want to!