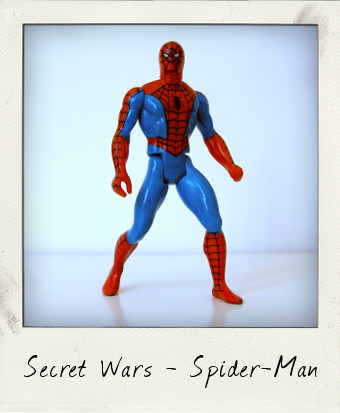 Whilst Super Powers will probably remain my first choice as winners in the great superheroes action figure stand-off during the mid 1980s, when the mighty Mattel joined forces with Marvel to produce the Secret Wars line in direct competition with the DC Comics branded Kenner Super Powers product, I have to admit that I’m growing to like the Secret Wars figures more and more.

Bright colours, solid sculpts and accurate comic-book costumes and likenesses made these figures popular at the time and if you can pick up a figure that has survived with its paintwork intact like Spider-Man here, they make fine display pieces for any vintage collector today.

Spider-Man was issued as part of the first wave of figures in 1984 alongside Captain America, Dr. Doom, Magneto, Iron Man, Wolverine, Kang and his very own villain Dr. Octopus (who also featured in the original backing card comic strip that came with the original blister). With five points of articulation at the neck, shoulders and hips, his movements may seem limited compared to the Spidey figures of the noughties where even his toes wiggle, but with his right foot already raised on its ball and his left hand curled into a fist, he already seems intrinsically dynamic and ready to spring into action. At 4 ¼ inches tall he’s a tad shorter and generally slightly skinnier than the other figures in the line making this feel like a younger Peter Parker.

The Spider-Man Secret Wars figure is probably most famous, however, for the fact that he was created not once, but twice, with two distinctly different variations. This is the first of the two Spider-Man figures wearing his classic red and blue costume  – another, all black figure, was also produced. Watch this space for news on that one – I plan to track one down! Like many of the figures in the Secret Wars lines the paint work could be delicate on Spidey – the black web design on the red areas has a tendency to smudge or rub off. Luckily, my figure is in excellent shape with only the very slightest of paint wear rubs. The web pattern is also a bit patchy and doesn’t quite cover the whole of the red area as if the decals don’t  quite match up – most noticeably along his shins – although this is only a minor gripe.

Once again, this figure was issued with the Secret Wars Secret Shield gimmick that came with all the action figures in this line – a two-sided lenticular image disc could be inserted in the shield which changes when tilted and viewed from different angles. My Spidey is complete with his shield, although I’m happier displaying him without this rather un-typical Spider-Man accessory. A classic!